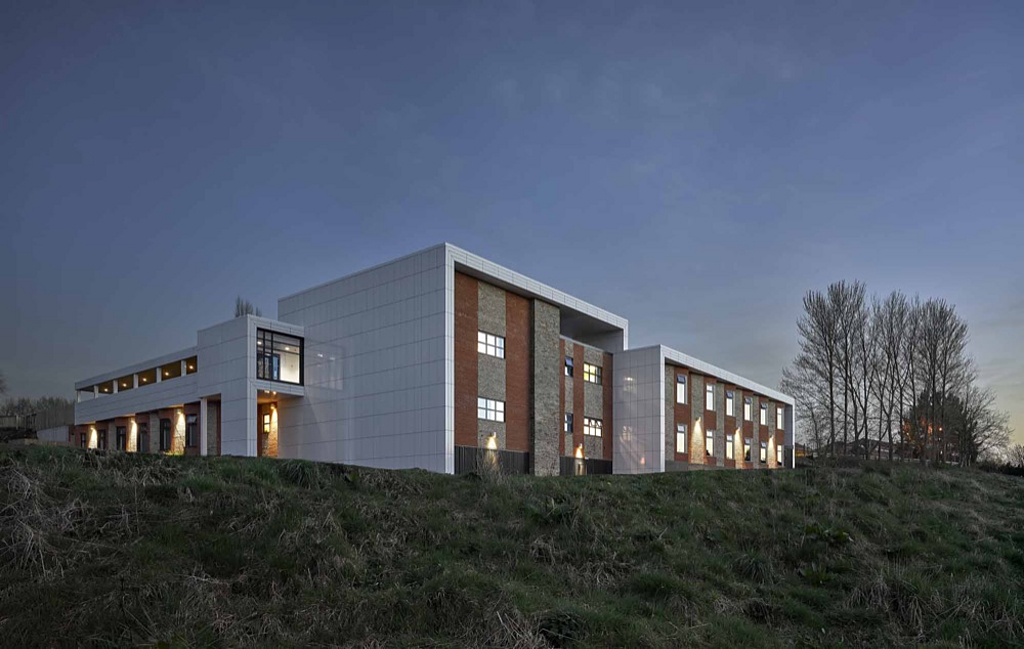 Like a series of arches that interlock, intersect, separate and stand out, the new twenty-four-bed intermediate care unit at North Manchester Hospital in England is both unsettling and intriguing on the eye, in equal measure. Designed by the Lewis and Hickey firm of architects, in close collaboration with Terreal, this project to accommodate patients convalescing before they return home plays a transitional role in terms of its design and appearance too.

Built on a green, sloping site, it juggles with scale, levels, and perspective to create a warm and homely aspect, quite different from traditional hospital conventions.

The façade has a single white glazed finish but using two Terreal products that, when subtly combined together, add dynamism and a contoured appearance. In order to create a monolithic effect, the architects chose the large format Piterak Slim 60 cm cladding system for the building’s “backbone”. This is a product with two key strengths that make it perfectly suited to the project: a closed joint that adds uniformity and smooth appearance, as well as the flexibility of being suitable to install both horizontally and vertically.

For the outsize arches, looking like giant football goals, the Maestral Slim 20 cm cladding won universal approval. Arranged vertically, in rows of three, it makes the building look longer, creating the impression of dominating the landscape.

The largest challenge was dealing with the fact it was impossible to attach the clips to the edges of pieces cut diagonally for joining vertical and horizontal sections. Ingenious and totally invisible.